The White Rock Beach Gallery is ALLOWED BACK on the Promenade 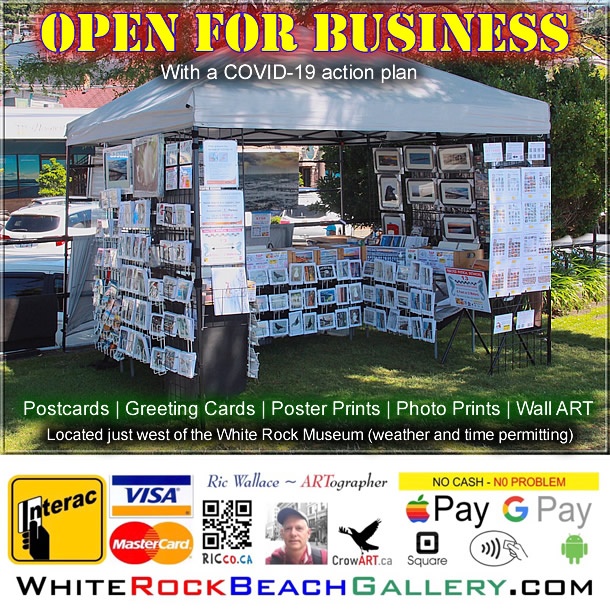 ARTISTS UPDATE –  3 artists are allowed to setup.
Ric Wallace and 2 other artists so far.

The Covid 19 Economic Tsunami is hitting the world hard; with tourist destinations and services possibly taking the brunt, and in turn, many businesses will be closing their doors for good globally. A second or third wave is not out of the picture.

Living in White Rock, BC Canada on the edge of the Pacific Ocean for 9+ years and catering to the tourist market, Ric Wallace has met and overcome many unexpected challenges and overcome them with success. Ric has seen dozens of businesses sell or close the doors over the years in White Rock / South Surrey. His philosophy is DO NOT FOCUS ON WHAT YOU CAN’T DO, but rather, FOCUS ON WHAT YOU CAN DO. 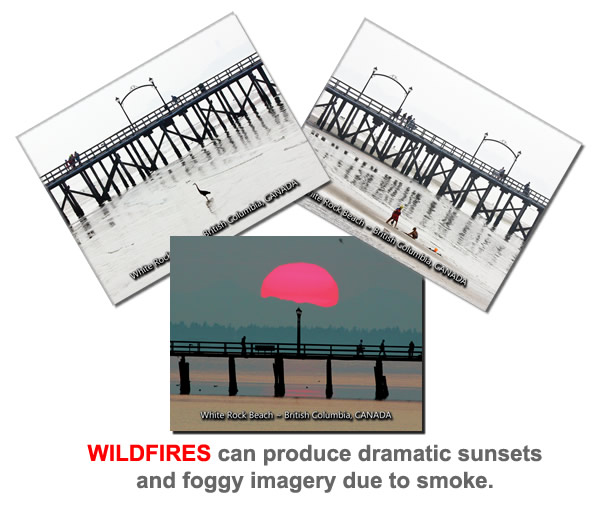 In the summer of 2018 British Columbia and Washington State, USA and neighboring areas had to endure the health risks and damages associated with wildfires. Most people were complaining and sitting back watching the news. ARTographer Ric Wallace was out capturing dramatic sunsets and foggy imagery due to smoke, as the air quality was not ideal for setting up at the beach. He would prefer NOT to be taking photos of events like this, but if it is there why not document it. Many of these photos are sold as postcards, greeting cards, and Wall art. 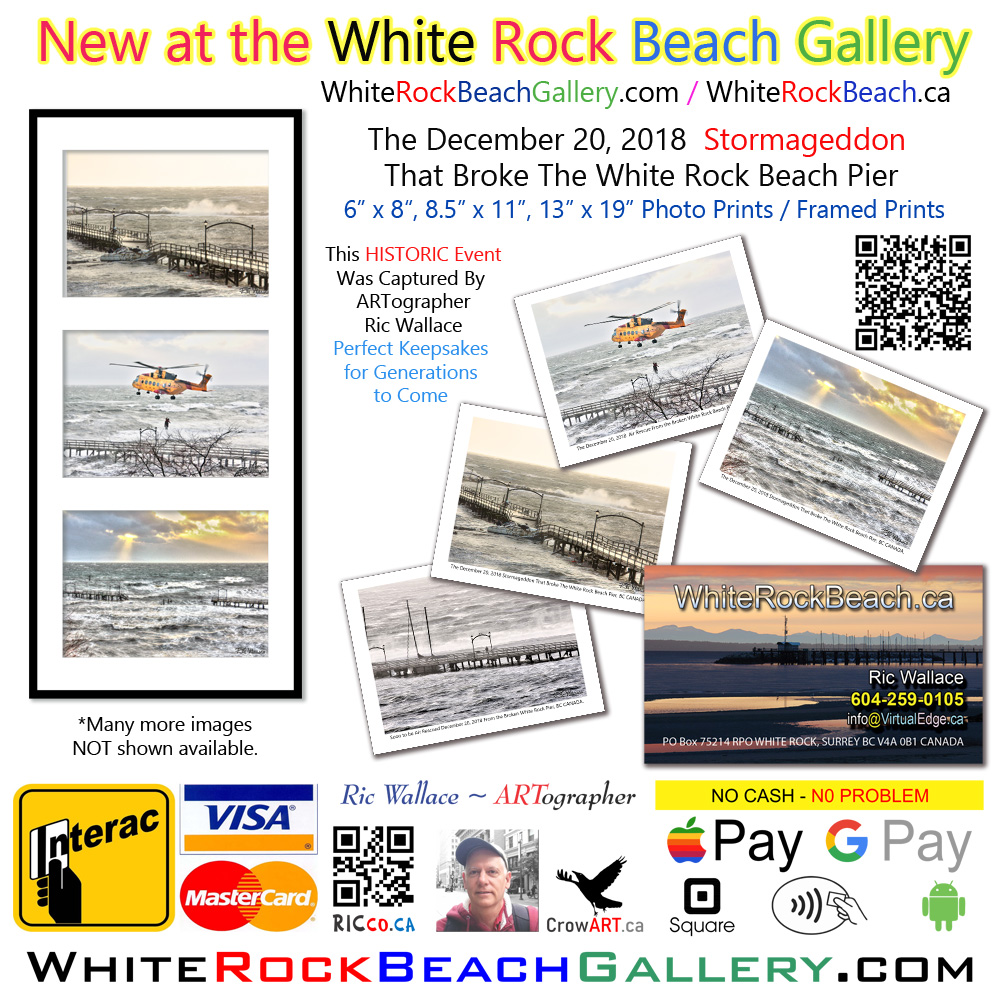 On December 20 2018, the famous White Rock Beach Pier was destroyed in what Ric calls the Storm of the Century which saw him out snapping photos of the action. On the following day (December 21st) Ric Wallace was set up at the White Rock Beach waterfront under the Artist Walk program, with printed photos he took the day before. People were walking the promenade looking at the missing middle section of the 100+ year old pier and crying over what happened to a landmark that has meant so much to many people. Poster prints and other sized photos of the helicopter rescue – taken less than 24 hours before – were on display and selling like hot cakes until they sold out. 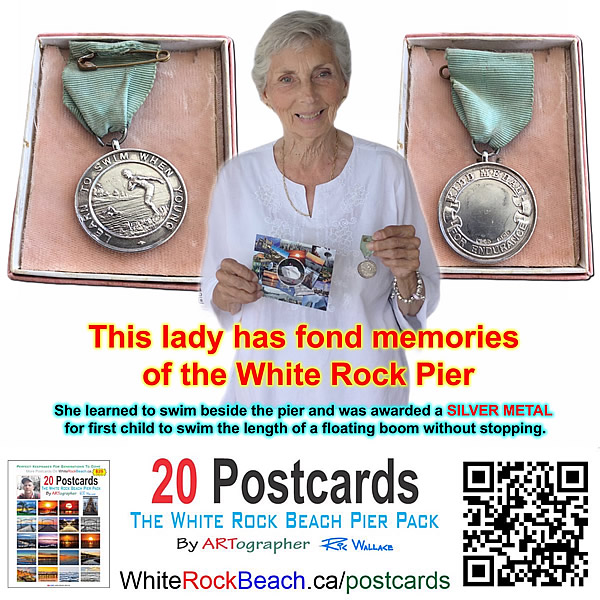 If you want to see the ARTISTS setup, once again along the White Rock Beach promenade. PLEASE let the City Of White Rock know – www.whiterockcity.ca

December 24th Christmas Eve day, Ric was set up once again at his White Rock Beach Gallery (https://whiterockbeachgallery.com/), attracting as much attention as the broken pier. Ric had plans of maybe setting up on Christmas day, but the long cold days at the beach, power outages, no heat, puffy eyes, sore back & joints he decided to take the day off. After turning on the computer, checking email and the weather forecast, plus paying off his Mastercard, a thought popped into his head he claims NOT to be his. The thought was to check out the domain WhiteRockPier.ca, so he entered the web address. PAGE NOT FOUND was displayed – years ago someone was using this domain to sell real estate or some service, so then he visited a domain register site to see if it was available.

With his screen saying, “Available to register”, but not wearing his glasses he could not believe what he was seeing so he enlarged the screen 800%. When he is tired, his speech and spelling goes out the window. Not wanting to spend money on a misspelled domain (happened once before), he asked his wife as she was putting the Christmas turkey in the oven “How do you spell PIER?” she replied it is a 4 letter word – P   I   E   R  – it is PIE with an R. He said that is what I typed, and one click of the mouse and $11.55 plus tax was applied to his credit card. 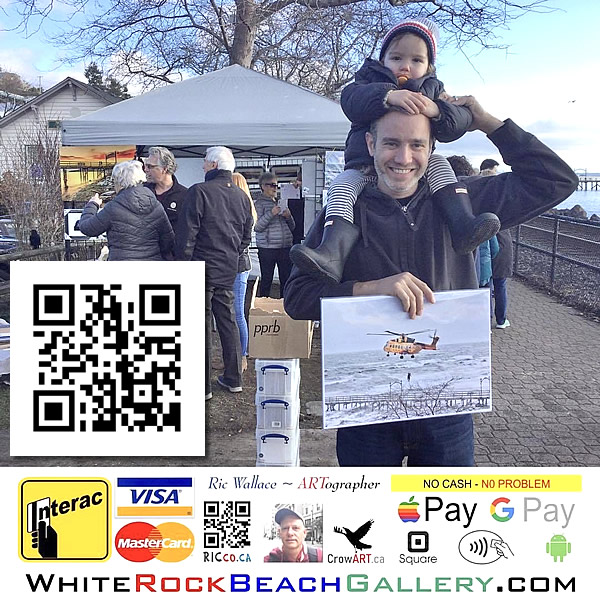 On December 30, 2018 – The Pier Guy shown in the above photo,
receives a FREE 13″x 19″ poster print on the promise NO more helicopter rides. LOL

Ric loves to share the story of why he went out to take photos the day the pier was destroyed; you can ask him if he is set up at the beach (a good story to hear). He feels the UNIVERSE rewarded him for being the only ARTIST WALK photographer (hundreds of people were out snapping photos) to be capturing the events leading up to the helicopter rescue and the stunning sunset that lasted just 4 seconds.

On July 19, 2019, once again a thought came into Ric’s head to check out WhiteRockPier.com. He repeated what he had previously done on Christmas Day and it was available for purchase – click, registered, no need to back order a domain.

In Jan 2019 a series of Storm of the Century postcard sets were produced and offered for sale listing the newly registered domain WhiteRockPier.ca. The City of White Rock was even selling the $30 & $40 sets with a portion to go for the pier reconstruction project.

With the pier reconstruction starting in March 2019 and lasting until late August 2019, sales for artists at the beach were the worst ever for many long time artists, and Marine Drive merchants also had the same fate. In 2019, Ric lost a few months because of surgery and also had to find a new place to live as his landlord had a family member moving back to Canada. All the White Rock Beach Gallery tents and products were placed in storage while looking for a new place to live. Two days before he was to take possession of a new place July 15, it was found he was a victim of a rental scam in White Rock. With the help of and a visit by White Rock RCMP to the person who took his money, he was able to get his money back but had nowhere to move to. His current landlord offered to extend his stay while a new place was found. Not giving up, a place was found and days before the pier reopening last week of August 2019, the White Rock Beach Gallery was open up for business overlooking the beautiful Semiahmoo Bay and the restored pier. Long story short, after 5+ months closed at not able to go to the beach – setup stuff in storage – 2019 turned out to be the best year for sales in BC for Ric. 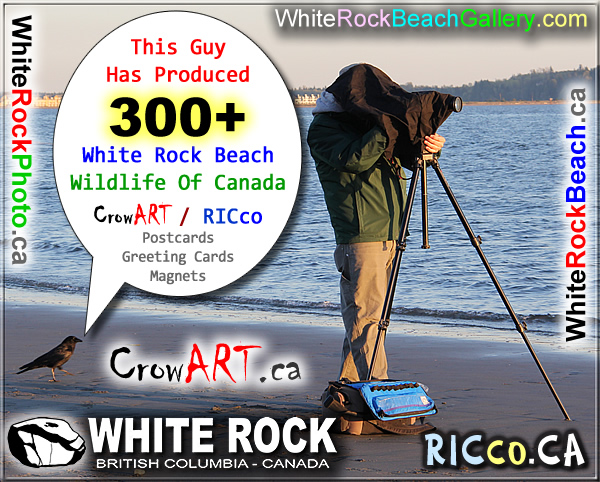 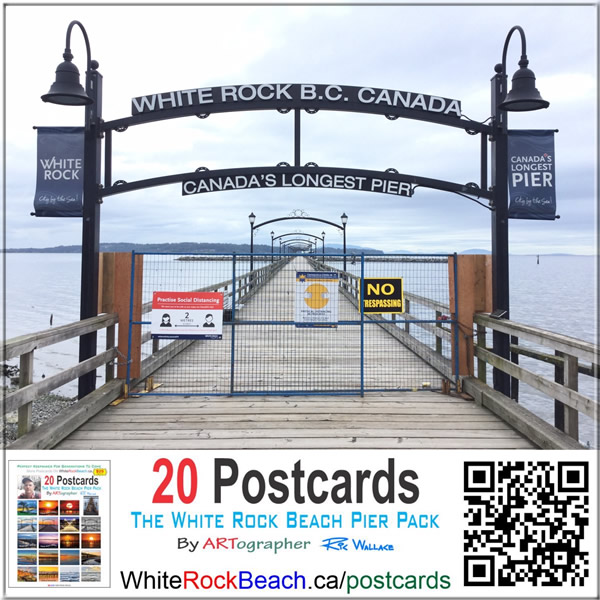 With the pier closed, promenade closed until near the end of May, and with most stores that sell Ric’s postcards, greeting cards, magnets, etc also closed, things were not looking good. Sales at Save On Foods at Semiahmoo Shopping centre were not greatly affected. With the onset of the pandemic, people were told to stay home, and scared to go shopping. Putting Ric in front of a TV will put him to sleep.

Ric was thinking he needs a million dollar idea.

The odds on the lotto are bad in Canada, so he said: 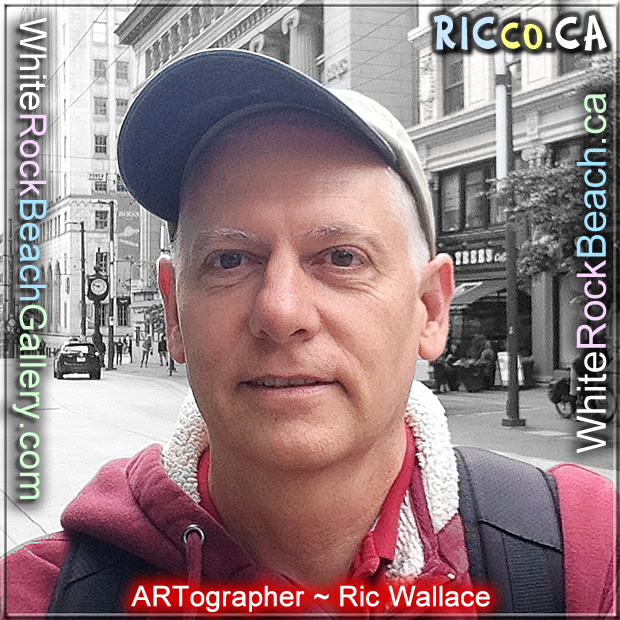 With the USA border closed, no cruise ships, air flights to BC at a fraction of what they used to be, people out of work, stores closed, no toilet paper in stores, and disposable incomes vanishing due to the need for rent or food money, Ric wondered what he could offer for $10 to $30 with an average sale of $25 being his TARGET. People will still pay $5 to $25+ for coffee and a treat or sandwich. 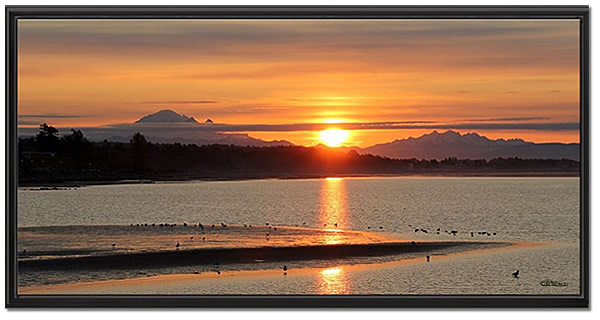 Large wall art costing hundreds of dollars will be a harder sell this year. 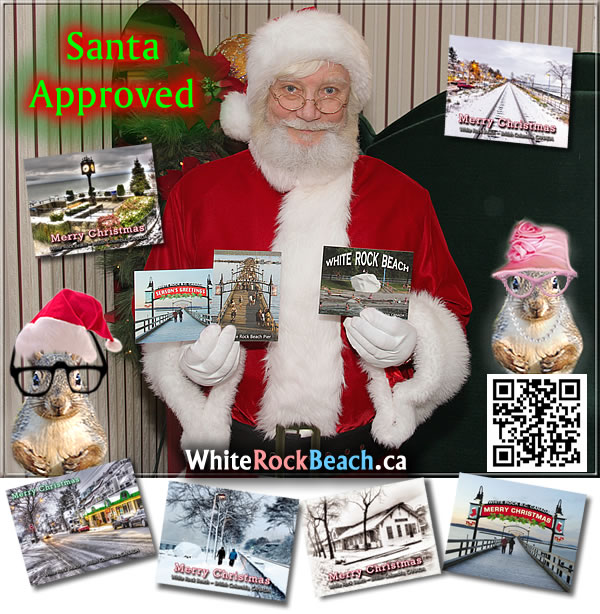 The Christmas, Season Greetings, winter scenes, etc set a record for 2019 at the waterfront (up over 300 % over 2018) and in stores due to them being new cards. The Storm of the Century postcards were a very profitable idea (no other product on the market). Wanting to minimize spending in a time of uncertainty and having stock of 300+ different postcard designs, Ric needed an idea to suit the times. Conducting business during the Covid 19 pandemic means changing the way business is transacted, so he had the idea to assemble postcard packs sealed in plastic with a mini contact sheet showing the enclosed postcards. He knew this would be the idea he needed to surf the Economic tsunami topside and online. 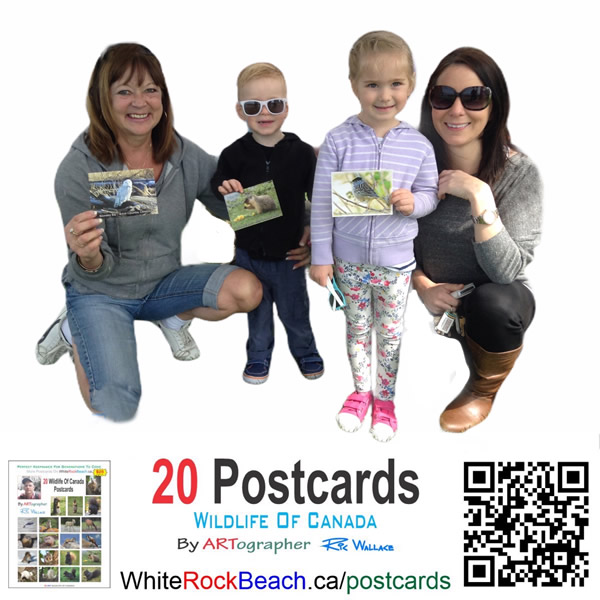 After 4+ weeks, 500+ hours (He was able to do this only because of Covid 19 – bored), and some more $$$, Ric Wallace (MR WHITE ROCK) now has 16 postcard packs offering a savings over single-card purchasing. The names of the postcard packs would also play a factor to get people’s interest.  Retail stores only have up to 40 of the 300+ postcards found on WhiteRockBeach.ca and do not offer the sets. If at least one of these themes does not interest you, there’s no need to come to White Rock.

Special discount for pickup or in person sales – contact for details.

All packs are for sale on WhiteRockBeach.ca, a catalogue can also be downloaded for FREE as a PDF. Ric is also offering a further discount for in-person sales (no shipping charges and a discount equal to the tax charged online) in White Rock/South Surrey or the promenade (if allowed by the city). 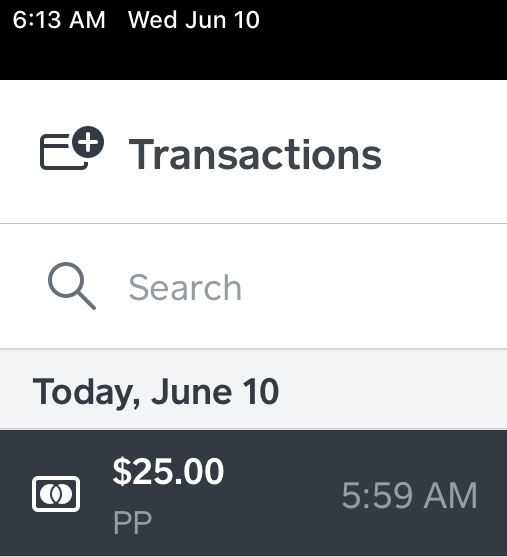 On June 10th an Amazing Tourist Pack was purchased at 5:59 am while Ric woke up at 6:13 am – YES, RIC hit the $25 target with the first sale. Making money while you sleep is a great excuse for afternoon naps. A past customer at the White Rock Beach Gallery made the purchase online. Upon delivery they also wanted a Santa Hat pack which was in my trunk, so another sale was made and an email receipt (with a link to my website) issued to support this story. This would not be the first time Ric has made a sale from the trunk of his car. One morning he woke up to find over $900 USD in his email inbox with orders all going to the United Kingdom and had no idea for the spike in sales. He wrote to one customer asking what prompted the purchase and she replied, “I saw you on the BBC1 last night.” I have never been to the UK and if you meet me at the beach, I will tell you the story and show you what she saw on TV. 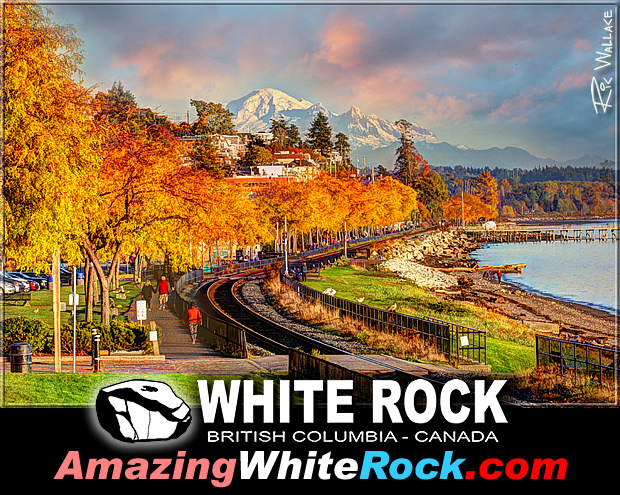 If the White Rock Beach Gallery / Ric Wallace is  ALLOWED open for business at the beach (Covid 19 – 2020?), the wheels have been turning on how to be open for business. Gloves, face protection, etc and even QR codes can be displayed so people can see postcards, greeting cards, magnets, poster prints, wall art on their own smart devices to help Ric quickly find what they want to purchase, something other artists and businesses should consider.

He has even created a layout, to scale, or blueprint on how his setup can be changed working within the confines of the new normal for doing business. It is easier to work things out on the computer than trying to move tents, tables, products on site to come up with an ideal setup. Using Square for tap or email payment, credit or debit sales can be made and an email or text of the payment receipt can be issued. (Cash can still be accepted.) 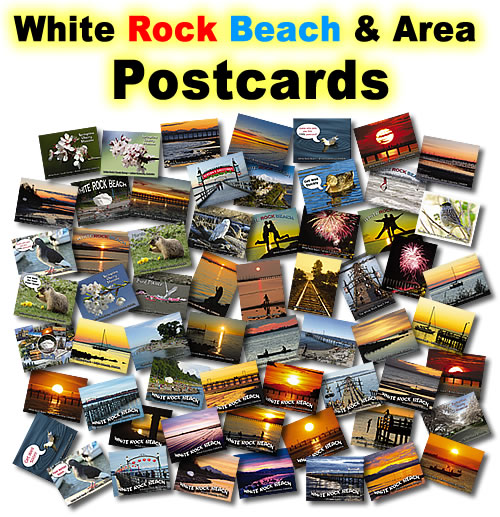 Every postcard or greeting card produced by Ric Wallace works as an advertisement showing the beauty of White Rock Beach or birds & Wildlife of Canada with zero tax dollars spent. If you want to brag about White Rock Beach to relatives or friends anywhere in the world, these make great keepsakes or collectibles for generations to come. Have some relatives you do not want to see? Send some the Snow Pack postcards and scare them away saying we have too much snow here (LOL). One customer has sent these to relatives in the UK doing just this.

The above stories are NOT meant to be bragging but maybe inspire people.

Do you want to be BULLIED out of business by the Covid 19 virus?

Or do you want to adapt to what they are now calling the new NORMAL? 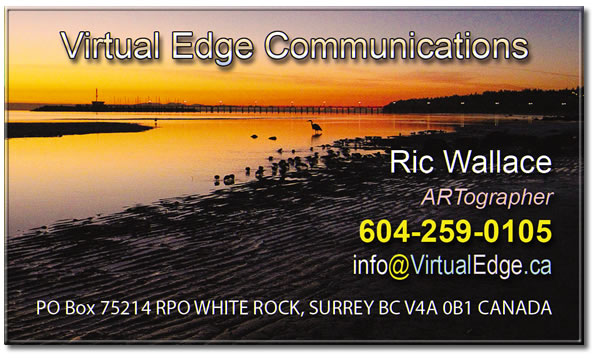